Last night I acquired the Steampunk Tarot by authors John and Caitlín Matthews and artist Wil Kinghan. Steampunk as a genre has never held much interest for me, but I appreciate the depth of thought and wisdom that the Matthews bring to their work, so this particular deck has always drawn my attention when I’ve seen it sitting on the bookstore shelf. I just never felt that $20 was worth the price of a deck I was only slightly interested in. Then last week I took my oldest daughter out on “date” (I try to give each of the three of my kids some one-on-one time now and again) and I saw that a single, final copy of the Steampunk Tarot was in the bookstore’s clearance bin at 50% off. I snatched it up. But ultimately I thought, “Do I really need this deck? I have several others I’m exploring at the moment…” and I decided to put it back. Last night I took my younger daughter out on our own “date” and she wanted to go to the bookstore, too. On a whim I thought I’d see if the deck was still there, though I doubted it would be after so many days, and at such a low price. Nevertheless, there it was. This time I decided to take it home with me. The art seems to be a mixture of photographic collage and artwork, but the overall look is unified and interesting. This post is not a proper review so I won’t go into all of the details here, but I will discuss a short interview I did with these cards, in light of the previous interview with the Cosmos Tarot having gone rather well 😉 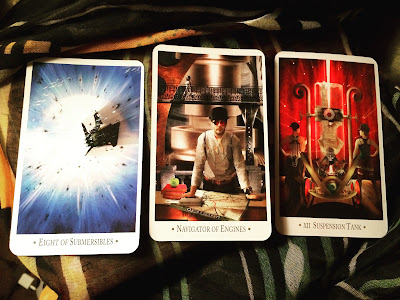 1) What is the strength of the Steampunk Tarot? 8 of Submersibles (Cups) This deck will be a great tool for plumbing the depths of my psyche, my deepest longings, for uncovering the areas of my life in need of release and refreshment. In this image a submarine soars deep into the mysterious reaches of the ocean, but rather than finding itself surrounded by darkness, it approaches the bright light of illumination; a precious discovery awaits.

2) What can it teach me? Navigator of Engines (Knight of Wands)

The Navigator of Engines is a spiritual traveler, always on the move. He indicates that this is a great deck for exploration and journeying, for identifying my spark of life and finding ways to embody it. This card appeared inverted, which indicates subtlety and inner workings. But it also brought to mind a concept I recently learned about: in Kung Fu, “patience” and “mastery” are represented by the symbol of fire, reversed. The key is not to dim the fire, but to control it; to know when to unleash it and when to contain it. In this light it carries a resemblance to Strength. I like the idea that this card might refer to a deeper understanding and embodiment of personal power and responsibility.

3) How can I best approach working with it? XII. Suspension Tank (Hanged Man)

In order to get the most out of this deck it will help to suspend judgment, and open myself to its offerings. As I said before, the steampunk genre has little interest for me, but I do find that the decks that I love working with the most are those that challenge me the most. Therefore the imagery here may provide new angles and perspectives from which to understand myself, my environment, and my interactions with others. In this image a figure hangs suspended upside down in a tank with two others observing. A beam of light moves through the suspended person, through each major energy center of the body. By sacrificing the ego, profound insights may be discovered.

I’m glad I finally own this intriguing set of cards; here’s to a new journey!