I’ve come to regard the court of Air in the Tarot as my principal teacher in 2016. The Knight of Swords made many important appearances throughout the previous fall, along with the King, and at times the Queen as well. They are here to help me recognize the power of their element within me, and to develop those aspects of my Self that will benefit most from their energy and wisdom.

The other night I drew a card from the Dark Goddess Tarot asking how I might best approach this integration of Air and out flew Cerridwen, the Witch of Fire: 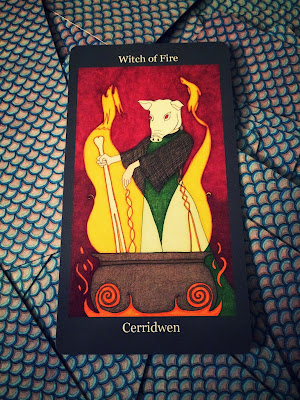 I picked up the card and when I saw the sow-faced figure of this goddess I was entranced, though also slightly mystified that I should receive a fire card when asking about how to enhance my air qualities. The guidebook names Cerridwen a goddess of transformation: “Craft anew with the bones of the old.” Ah, transformation. Becoming. This is certainly a year for those things. The infrastructure remains, but the qualities and elements are engaged in an ever evolving dance of growth and change. Cerridwen tells me that my walk through the realm of air is not so much a journey that I’ll be navigating, rather it will be a process that will occur organically within and around me. It’s simply time. I will learn to breathe and to speak. I will learn to release and to name. I will craft and be crafted; I will learn to allow the breeze to move through me. I will learn about power, and about the ways in which air and fire feed and influence one another. Air is already mine; I will learn to claim it.

As we drove to the sea a couple of days later I decided to pull a card for each family member for the year ahead from the Cosmos Tarot and Oracle deck. Uranus for my husband, Grus for my eldest. The Knight of Water for my Pisces son, and Canes Venatici for my younger daughter (a dog-lover, “incidentally”!). Lastly I pulled my own….. Lynx – King of Air! 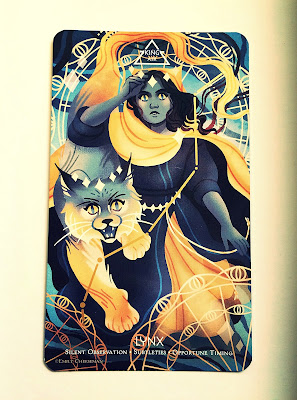