The Winds of Oyá Blowing

I haven’t been able to post as much as I’ve wanted to of late. I think about it every day and between teaching, managing, parenting, and doing many (wonderful) readings for (lovely) clients, I never have the time or the energy. But I’m making space tonight, to release some of this energy. Throughout the month of October much movement was taking place. I started to see 333 everywhere, and it’s the first time I’ve ever noticed numbers like that, and felt its significance. Eventually I came to feel that it was an acknowledgement that I was in good (spirit) company, and I felt that attention quite pointedly. It was comforting.

I’ve already written about the crazy happenings with our car so I won’t recount it, but I was both aware of struggle, and aware that there was something more transpiring. In those moments where the challenge of the moment felt sharpest, I kept this mind, and placed my faith in what I couldn’t see, but what I knew was there nonetheless. I pulled a lot of 10 of Swords, but one of my more memorable draws was during the Shadow Work October challenge where I pulled Obatala, Elegua, and Oyá from my New Orleans Voodoo deck. It was a powerful line for me: my father, my best friend, and the sacred presence of Oyá; the shifts and transitions she brings along with her. 10 of Swords, Oyá…. the car died, my egun, Elegua, always Eshu-Elegua, 333 and 33…. so many things sifting through my mind….. 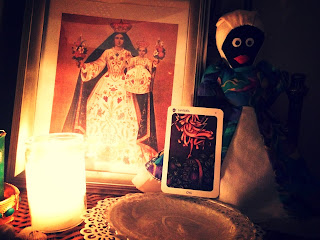 Oyá is called the “owner of the marketplace” and the “owner of the gates of the cemetery.” These are often treated as literal, and they can be taken as such, but they are metaphorical first and foremost. Oyá is owner of change. The marketplace is Earth. The market is where we engage others, we barter for what we need, we pay and are paid, we argue and laugh, we learn about the affairs of others, we sing, we eat. We live. The “marketplace” is simply another word for the world in which we live, where constant change, upturns and downturns, is the way. There is a saying, “The world is a marketplace; our real home is the spirit world.” Oyá is not the owner of the cemetery itself, rather the passage – the doorway – the portal between the marketplace and the spirit world. The cemetery is a physical place. But she ushers us from an old way of life into a new, encouraging us to let go, to shed our skins, and thus she governs the process of transformation of which death is a part. Oyá’s winds tell us that it is time to leave; to leave what we are used to, what wasn’t working, to pack our bags and get ready to go. She helps us to peel away our old selves, she gives the courage and strength to burn down and rebuild, always better than before, always more than we could have ever really understood. She gives us the gift of change, a gift always meant to bless us when all is said and done. In so many ways my life has changed in the last month alone. I’ve been scared, sad, anxious, speechless, furious, determined, worried. I’ve been grateful, moved, touched, thankful, speechless (again), honored, humbled, in awe, triumphant. My life has utterly changed. The reality I see as I look out from these eyes is not the same as it was a month ago. I have possibilities now that I never imagined. There is newness in my life that I didn’t anticipate and could not have imagined. I have learned a lot. And I realize that I’m somewhat inarticulate here; I am forming these words with the last dregs of today’s energy, but it’s been over a week that this has been calling for release. Hope and faith are everything. Trust is so important. To stay positive, even when the outlook appears dark, is the only way. It’s not easy, but it’s the only way.