For day 12 of the Shadow Work October challenge, the task was to pull a card (or two, or three) on the following question:

What can’t I accept about myself (and why)?

As I was shuffling, Judgement flew out of the deck at me, and I knew that it was the one. This is a card I really love in any deck, so I was immediately curious about what it would have to tell me. Turns out that it had quite a lot to say.

This pulled something from deep within me, and as I read over my own thoughts for the first time, I started to cry. It’s funny, in a way. I love this card because of everything it represents: rebirth, evolution, heeding the call to our path, embracing who we are, truly. In many ways I feel I embody this. And yet it appeared as the thing that I can’t accept, or don’t allow myself to accept, about myself. And as I pondered, I knew it was true. In this image I see the vampire and the panther as my guides and support system. The moon above – my fears, doubts, uncertainties, the small hauntings in my subconscious Self – dissipate, are burned away by the fire of transformation. In the book, Ian Daniels writes that the vampire himself has just emerged from his grave. But when I see this card I see molten earth glowing, warning of my own impending emergence. He is there encouraging me, and awaiting me, as is the panther. The blood on his sword represents my old shell that he has done away with in order to make space for the new.

Judgement is a Trump of pure fire. Fire has been the overwhelming theme of late – embracing my own fire, and my personal power. Interestingly, all of this has brought up a lot of sadness for me. Some of it makes sense as I think about ways in which I’ve been limiting myself. But I can’t figure out all of it – not yet. I pulled a card asking for the best way to process this sadness and out came: 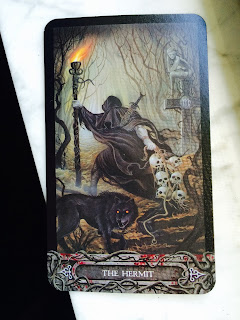 Ah yes, of course! My friend, the Hermit, tells me that I’ve only just begun. In order to understand and come to be able to express the source of the sadness that has surfaced, I must keep digging. With my firebrand before me I must stride purposefully into the dark wood of my being. I love that there is a wolf here. As I was preparing the photo of Judgement, I felt an urge to include the bronze Viking wolf ring that my husband brought back to me as a gift from his time in Sweden. Viking and Norse lore, mythology, and culture form, in addition to Lukumí/Santería, an important aspect of my personal history, spiritual practice, and ancestor work, as much of the family on my father’s side comes from Denmark and the small islands of the North Sea. I find great strength in the wolf, and it was strength I was looking for when I was drawn to include my ring in the photo. The wolf seems to have come to my aid here with the Hermit, assuring me that I’m not alone in my exploration. And when I’ve come through on the other side, there the black panther will be waiting.

I had a lovely afternoon today with my husband and son, while our girls were in school. I was fortunate to have the day off, so we drove downtown and spent some time walking around the large lake there, filled with swans, ducks, ibises, and geese. As I watched a swan glide elegantly over the water I felt a sudden thirst for its energy – a soft-yet-sure, healing essence unique to this bird. I sat by the shore as one of them swam over, quietly watching me, asking for nothing, yet staying near all the same.

On our way back home, we stopped by a local shop so that I could pick up a couple of stones that I am feeling drawn to use at this time: Morganite and Ruby.

As I work through this month, and this challenge, I often think back to the card I’d originally picked as representative of this month: 10 of Swords. A new word has surfaced for me in light of it: purging. I am airing out my heart and soul, cleansing, purging, examining and releasing like I never would have imagined I could do, or would even need to do. I’m amazed with what I’ve uncovered so far, and grateful that the journey has really only just begun.