I’m admittedly a bit slow in the trends department. It’s been quite a while since I acquired a new Tarot deck, and now while everyone is oohing and ahhing over the Cook’s Tarot, here I am taking it back to 2014 with the Silver Witchcraft! This is a deck I’d admired for a long time, from when I first saw sample images prior to printing. I liked the simplicity of the art, the lack of card borders, and the warm, vibrant colors. A few days ago I decided to take the plunge, and this morning as I was outside mowing the lawn the delivery man pulled over and handed me a box – way faster than I’d anticipated! So let’s jump in: 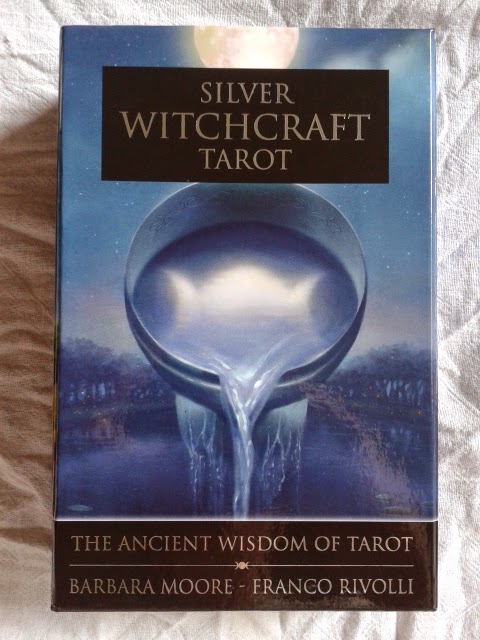 My overall feeling about this deck is very positive, and I will enjoy the process of getting to know it better over time. Naturally there are things I really like about it from the start, and others that aren’t my favorite, though the pros definitely outweigh the cons. I’ll discuss both:

-The box is well done and very sturdy. It flips open to reveal the book and cards within, and the cards can easily be lifted from their recess with a white ribbon. -The color scheme and art simplicity (by artist Franco Rivolli) are as nice as I’d hoped, and the lack of borders allows the images to “pop” when laid out on a reading cloth. 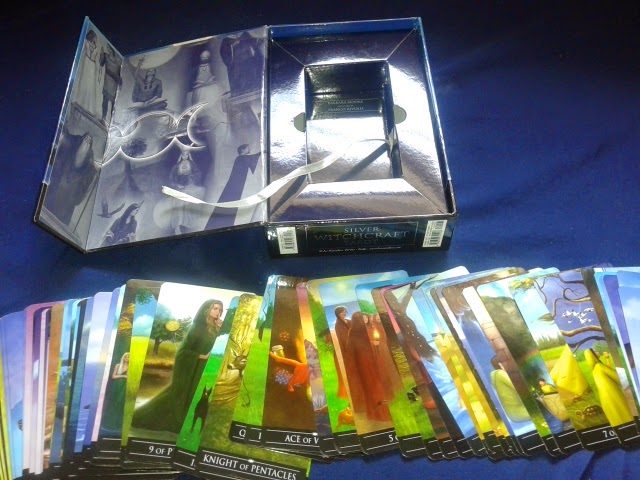 -Shuffling is a breeze; the cards have a smooth finish and are a nice size at roughly 2.5×4.5.” -The silver gilt edges on the cards are a nice touch, and don’t “catch” (which has been a downside to some other gilt-edged decks I’ve worked with in the past). -The accompanying book, written by Barbara Moore, is well thought out (of course it is!), providing insights into the inspiration for the deck design as well as multiple approaches to considering card meanings. Card images are in full color, which is a plus, and in the back of the book there is a selection of spreads to choose from. -The deck follows RWS in many ways, and yet very much has its own voice. Each number series across the Minor suits follows a particular pagan holiday, from Yule to Samhain, and includes the Self (Aces) and the Universe (10s). I thoroughly enjoy decks that bring something new to the plate, so I appreciate this feature.

I want to show some of the cards that I like the most from both the Major and Minor Arcana: 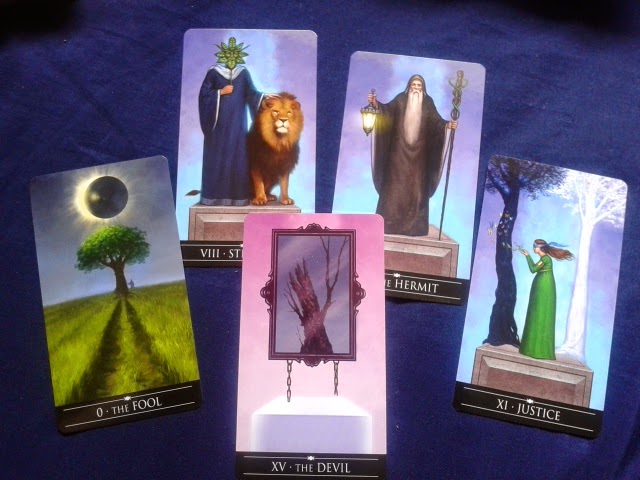 Here we have a selection of Major cards that are particularly lovely. The Fool shows an eclipse over a tree in a country field, and you can just make out the tiny figure of someone walking off on a new adventure. The Strength card features the traditional lion standing serenely next to a robed figure wearing a Green Man mask. I like how the sense of embracing and directing the energy of our primal nature is depicted so simply and clearly. Justice is pretty awesome: a pregnant woman blows a handful of multicolored butterflies over the image of a black tree – black and white symbolizing two natural poles that are kept in balance. The Devil features a mirror reflecting the image of a dead tree branch, reminiscent of confronting our shadow selves. The elderly Hermit bears a glowing lantern in one hand, and a caduceus staff in the other – a symbol of the healing power of learning about ourselves and about life. 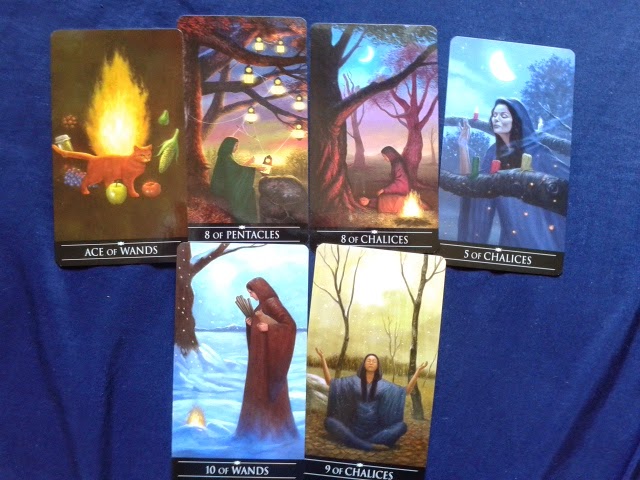 In this photo are a selection of Minor cards that I love. The 9 of Chalices (Cups) shows a woman communing with nature – not a typical depiction, but one that speaks to me, as it brings to mind just how many times I’ve sat alone in the woods, in bliss. The 8 of Chalices shows a woman settling her child in for the night, warmth provided by a glowing campfire. Again, another non-traditional portrayal, but what I see here is a woman on a journey. She’s separated herself from the “fray” so that she can reflect on her feelings, what satisfies her, and what needs to be released. The Ace of Wands conveys the feeling of pure creative fire, and the 10 of Wands (showing a figure working to bolster a weak fire) expresses the difficult necessity of bearing out our responsibilities. I really like the image of a woman concluding a ritual in the 5 of Chalices, extinguishing candles as the moon shines above. The book explains that she must decide which candles to blow out, and which to leave burning, symbolic of having to let go. However what I see is a woman concluding a ceremony of remembrance, and I find that to be very appropriate, and even touching.

-The card stock is a bit cardboardy; this is good in that it’s on the thick-side, but it still feels more like cardboard, and lacks the strong-yet-supple quality of stock that I prefer. -While there is diversity in the kinds of people represented in this deck, it doesn’t feel consistent or balanced. -Some of the card images feel a bit awkward: 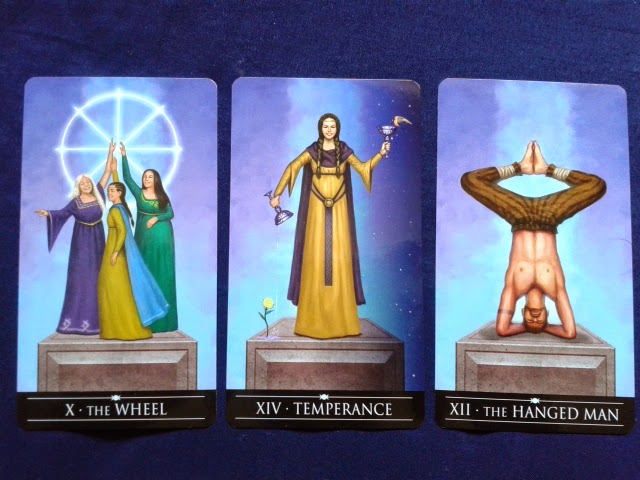 Here are a few of the Majors that are not my favorite. Maybe I’m being a little nit-picky, but there’s a lot of smiling going on in this deck, and most of the smiling feels a bit out of context. This Wheel shows three very happy looking women – Maiden, Mother, Crone – touching an ethereal wagon wheel. Their expressions look joyous, which is not necessarily an emotion I tend to associate with this card. Temperance shows a grinning young lady rather stiffly holding two cups – one pouring its contents down over a flower, and the other providing sustenance for a bird. Why is she so…happy?? Serene, I could understand, but what’s with the toothy grin? And the Hanged Man is not hanging at all, but is in a headstand yoga pose (looking rather like he’s sunning his nether regions). Well, I get that, and I appreciate that the focus on the willingness to change perspective is very evident, but I just don’t really like it that much. Maybe it’s the striped pants. 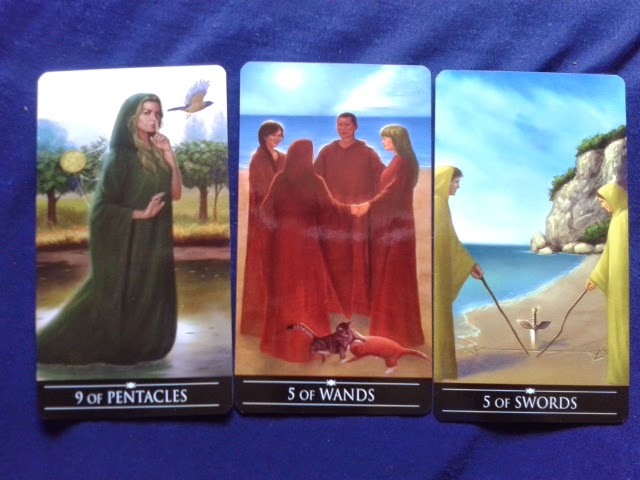 There is a similar element in this selection of Minors that I feel rather “meh” about, in that these 5s (which are meant to reflect conflict/challenge/energetic instability) show rather…happy….looking people. The 5 of Wands crew appears to be having a pleasant talking circle, while the cats battle it out at their feet. The man and woman in the 5 of Swords are playing some sort of game in the sand, and from the looks on their faces it’s apparent that they’re both enjoying it quite a bit. I understand that the focus here is on how we can turn conflict into compromise, we can hear each other out, we can choose to support each other rather than becoming wrapped up in winning or losing. But I think there is value in showing challenge, and I would prefer to see that. Then we have the 9 of Pentacles.  I like the idea of honoring silence, of enjoying the peaceful liminal space between the rich harvest and the coming of winter. But this card left me feeling a bit confused… a well-manicured blonde woman is shushing me, while a random pentacle floats behind her, stuck to her robe with strands from a spider’s web. At any rate, I can work with it!

I decided to draw a card, asking “What do I need to know about working with this deck?” As I started to shuffle, the Queen of Chalices jumped out at me, assuring me that my intuition will get along just fine with this set of cards: 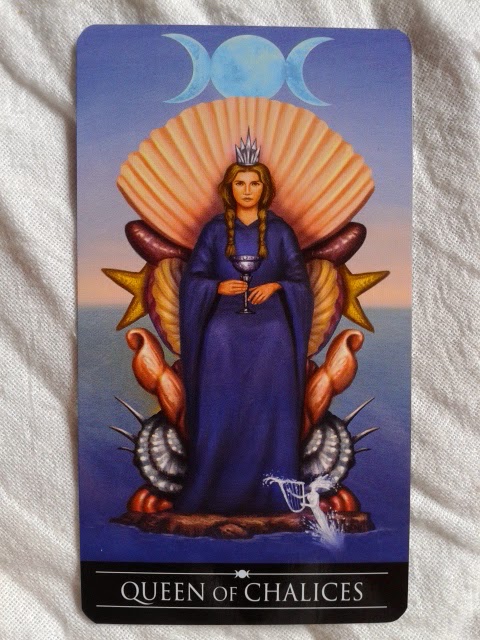 When I finished shuffling, I drew the 6 of Swords, inverted. This deck will take me on a valuable journey, but I must be willing to suspend my rational mind and allow the cards to tell me their own story. Alright, I’m game! 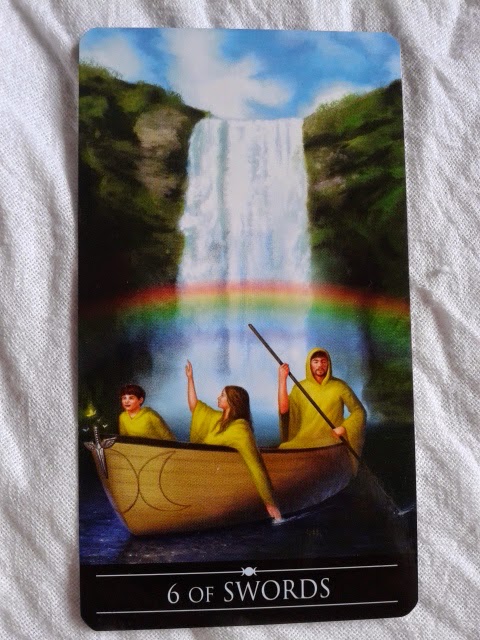 All in all I am happy to have this deck in my collection, and I look forward to exploring its depths, and learning what unique wisdom it has to share.